J.R.R. Tolkien was always fascinated by languages. In college, he specialized in Greek philology and graduated with Old Icelandic as a special subject. After graduation, he worked for the Oxford English Dictionary from 1918 to 1920, then taught courses at the University of Leeds. Among these were Old English heroic verse, Gothic, Old Icelandic and Medieval Welsh. He also became one of the most well-regarded authorities on the Beowulf mythos.

He was particularly impressed by the Finnish language, once remarking that finding a Finnish grammar book was like, “entering a complete wine-cellar filled with bottles of an amazing wine of a kind and flavor never tasted before.”

As a linguist, Tolkien is perhaps best known for his constructed languages, particularly the ones that appear in The Lord of the Rings and his other books and short stories pertaining to the fantasy realm of Middle Earth. Of these, the Elvish language of Quenya is the most well-developed, containing a lexicon of over 25,000 words. The Elvish language of Sindarin and the human language Adûnaic are also fairly well-developed. 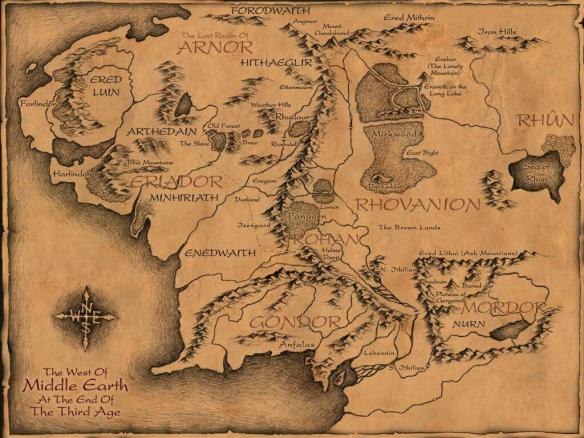 These are the languages of Middle Earth, as described in Tolkien’s The Simarillion, The Hobbit, The Lord of the Rings Trilogy and other stories.

The Elvish language Quenya is the most developed of Tolkien’s languages. It is very heavily influenced by Finnish, which can be seen in the absence of the voiced stops b, d and g and the endings -inen, -ainen, and -oinen.

Though phonological rules are Finnish, actual pronunciation is closer to Latin. Unlike Finnish, Quenya lacks vowel harmony, and accent is not always on the first syllable of the word. When spoken, it sounds somewhat similar to Italian, as can be seen in the following video, which shows the first chapter of “Genesis,” spoken in Quenya.

Quenya is an agglutinative language. Through various affixes, one word in English can have the same function as an entire sentence in English. For instance, the word Ecénientes in Quenya means the same thing as the English sentence, “They have seen it.”

Instrumental case shows that a noun is being used as a tool. Locative shows a location or position. Allative shows motion towards. Ablative shows motion away. The tenths case, which was never named in Tolkien’s writings, expresses a noun figuratively, such as “about wolves,” or “regarding wolves.”

Quenya, like Telerin and Sindarin, uses the Tengwar writing system.

As of 2008, 25000 words have been published in Quenya, based on Tolkien’s writings. A few examples of Quenyan words and phrases are:

Elen sí la lú menn’ omentielvo.  A star shines upon the hour of
our meeting.

Tolkien reciting the poem Namárië in Quenya in 1952.

The preceding video shows all of Legolas’ lines of dialogue spoken in the Elvish language Sindarin in Peter Jackson’s Lord of the Rings adaptation. Whereas Quenya was heavily influenced by Finnish, Tolkien based Sindarin off of Celtic languages, in particular Welsh.

Unlike Quenya, Sindarin mostly lacks vowel endings, but does include the voiced stops b, d and g, which Quenya lacks.

Plurals in Sindarin are created by changing the vowels in a word, as in goose becoming geese and man becoming men in English. For example, when made plural, a becomes e in non-final syllables and e becomes i in final syllables, so the word adaneth, meaning mortal woman, becomes edenith when plural.

Like the Celtic languages it is based on, Sindarin also contains consonant mutations. This means that letters in certain words may change sound depending on the letter preceding them or their context in a sentence. For instance, in Sindarin, the letter b becomes v when preceded by the article i, which means the. For instance brethil, silver birch, would become i vrethel, the silver birch.

Some examples of words and phrases in Sindarin are:

Man le estach?  What do you call yourself?

The elvish hymn A Elbereth Gilthoniel in Sindarin.

Westron, also known as the common speech, was the closest thing to a linga franca on Tolkien’s Middle Earth. As such, it was always translated into English in the texts. In later writings, Tolkien hinted that there was at least a skeleton of an actual Westron language, and that certain person and place names were translated in a way to preserve their meaning in the English translation. For example, the character of Mariadock Brandybuck was Kalimac Brandagamba in the original Westron. Since the shortened version of the name, Kali, means Jolly or Merry, the translated name shortens to Merry in order to keep the meanings similar.

The language Rohirric is translated into Old English in the Lord of the Rings novels, since it was an archaic cousin to Westron, which both descended from the Adûnaic language. The language does include some Scandinavian names, such as Westfold.

In his journals, Tolkien wrote extensively on Adûnaic, the ancient ancestor of Westron and Rohirric. One fascinating aspect of the language is that there were four word genders, male, female, neuter and common. Common referred to groups that could include both men and women. Unlike languages like German or Swedish, where genders are applied arbitrarily, gender in Adûnaic actually correspond to the noun they are describing.

Some words in Adûnaic are:

The dwarven language Khuzdul, like the Semitic languages, is structured around triconsonantal roots, those being kh-z-d, b-n-d and z-g-l. When spoken, the language sounds similar to Hebrew. Tolkien said he used Hebrew as a bases for Khuzdul because it sounded suitably alien compared to the European languages he had used as the basis for his Elfish languages.

Tolkien described Entish, the language of the tree people, as “slow, sonorous, agglomerated, repetitive, indeed long-winded.” It was a tonal language, like Chinese. Instead of naming groups or things, Entish would instead give them long-winded descriptions. For instance, in The Two Towers, the Ent Treebeard describes Orcs in Entish fashion:  “those evileyed – blackhanded – bowlegged – flinthearted – clawfingered – foulbellied – bloodthirsty, morimaite – sincahonda, hoom, well, since you are hasty folk and their full name is as long as years of torment, those vermin of orcs.”

In the above video, Gandalf speaks in The Black Speech, a language created by Sauron for his servants in Mordor. Tolkien said he created it with the intention of making it harsh and ugly. Historian Alexandre Nemirovsky has suggested that it was based on Hittite, and uses the presence of similar morphemes and endings, such as ishi and nazg as evidence. He also points to the fact that both are heavily agglutinative languages.

Above is the inscription on the One Ring. It is written in Sauron’s Black Speech and transcribed in a script called Tengwar. Translated into English, it says, “One Ring to rule them all, one ring to find them, one ring to bring them all, and in the darkness bind them.”

The Tengwar alphabet is one of two scripts Tolkien invented and applied to his Middle Earth stories.

The following is a graph of what is known as the “mode of Beleriand,” showing which sounds each letter corresponds with. This is the mode used to transcribe Quenya. 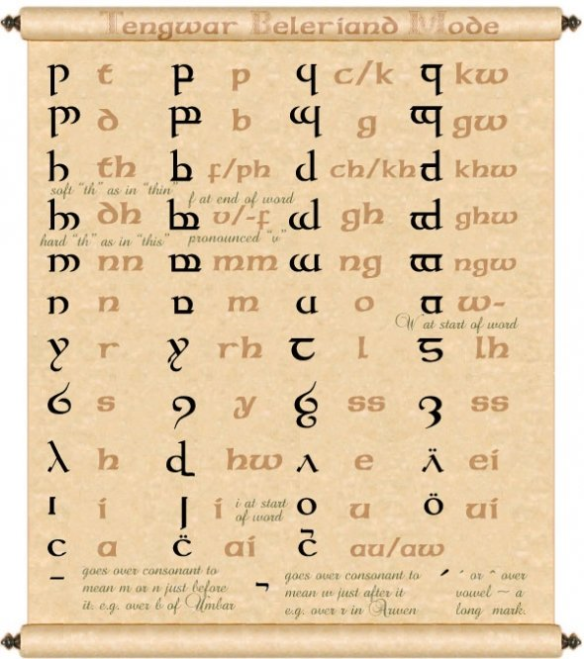 Third parties have created modes for English, Spanish, German and other languages. “Mary had a Little Lamb” in Tengwar is:

The second script invented by Tolkien is Cirth, used to transcribe the Dwarven language of Khuzdul. The following is the Cirth alphabet.  Bellow each letter is the sound that letter represents. It resembles Phoenician, which is apt, since Khuzdul is based on Semetic languages.

The Languages of Middle Earth
Blog at WordPress.com.